Behind the Cookbook: Joanna Pruess on the enduring appeal of cast-iron pans

Joanna Pruess is a food and travel writer who has written for The New York Times Magazine, The Washington Post, The Associated Press, Fine Cooking, and PBS’ online magazine NextAvenue.org. She has lectured about food and cultural anthropology at the Smithsonian Institution in Washington, D.C., The New School and Morris-Jumel Mansion, both in New York City, onboard Crystal Cruises, and in Istanbul and Izmir, Turkey.

Her 15 cookbooks include Cast-Iron Cooking for Two; Soup for Two: Small-Batch Recipes for One, Two, or a Few; The Supermarket Epicure; Cast Iron Cookbook; and Seduced by Bacon: Recipes and Lore About America’s Favorite Indulgence.

Joanna talks about what inspired her love of cast-iron cooking, how she came to write her books, and shares her favorite collections of recipes.

We’ve also teamed up with Joanna’s recommended brand of cast-iron cookware, Lodge, giving you the chance to win one of their high-quality skillets.

CONNECTING MY PAST AND PRESENT: COOKING WITH CAST-IRON

In the ten years since my Cast Iron Cookbook was published, cast-iron cookware has become really popular and I’m not surprised. For starters, cast-iron pans were already capturing the attention of a new generation of home cooks because the times were unsettled, and people craved comfort foods like their mother or grandmother’s Buttermilk Fried Chicken, beef stew, or blueberry crisp, which were typically made in heavy-duty black pans.

Many of those recipes are in the earlier book and some, like my Mom’s Mac and Cheese with Bacon, with its super-crunchy topping, evoke nostalgic memories. I still smile thinking about the giant version I made in a 14-inch black skillet as the centerpiece for an open-house party. Seemingly within minutes, all the guests descended on the buffet, and not one bite of pasta was left.

Cast-iron pans also started to catch on because many cooks at the time, even those with plenty of disposable income, had become disillusioned with designer or expensive cookware that didn’t last very long. Once they tried cooking with cast iron, they found that pans could do almost everything from searing, sweating, simmering, frying (both deep-fat and pan-frying), grilling, baking, sautéing, and braising – just about everything except microwaving. They work wonderfully on induction cooktops, too. By following a few guidelines, cast-iron pans are quite easy to care for as well.

To get on the cast-iron bandwagon, some novice cooks started by borrowing their mother’s or great-aunt’s pans. Others combed antique shops and yard sales. Along the way, buyers generally discovered that even newly purchased pans from companies like Lodge were reasonably priced and well made.

Increasingly throughout this decade, readers and restaurant-goers have been inspired by chefs – even in some upscale restaurants – who prepared and served sophisticated and rustic dishes in cast-iron pans. The food press, TV cooking shows, and blogs also featured tempting pictures of hash-marked swordfish or endive, charred asparagus or cauliflower, and individual chocolate soufflés, all cooked in cast iron. 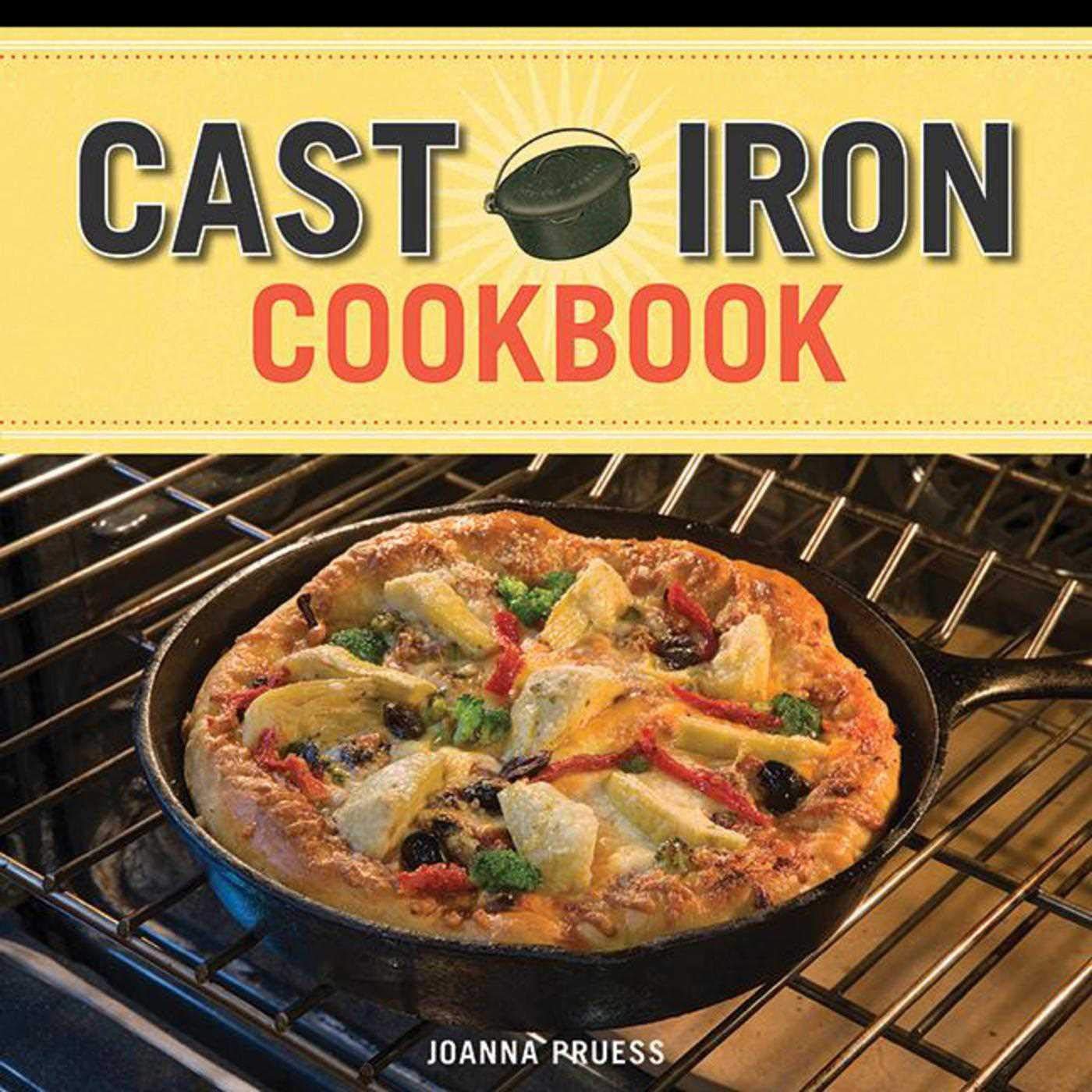 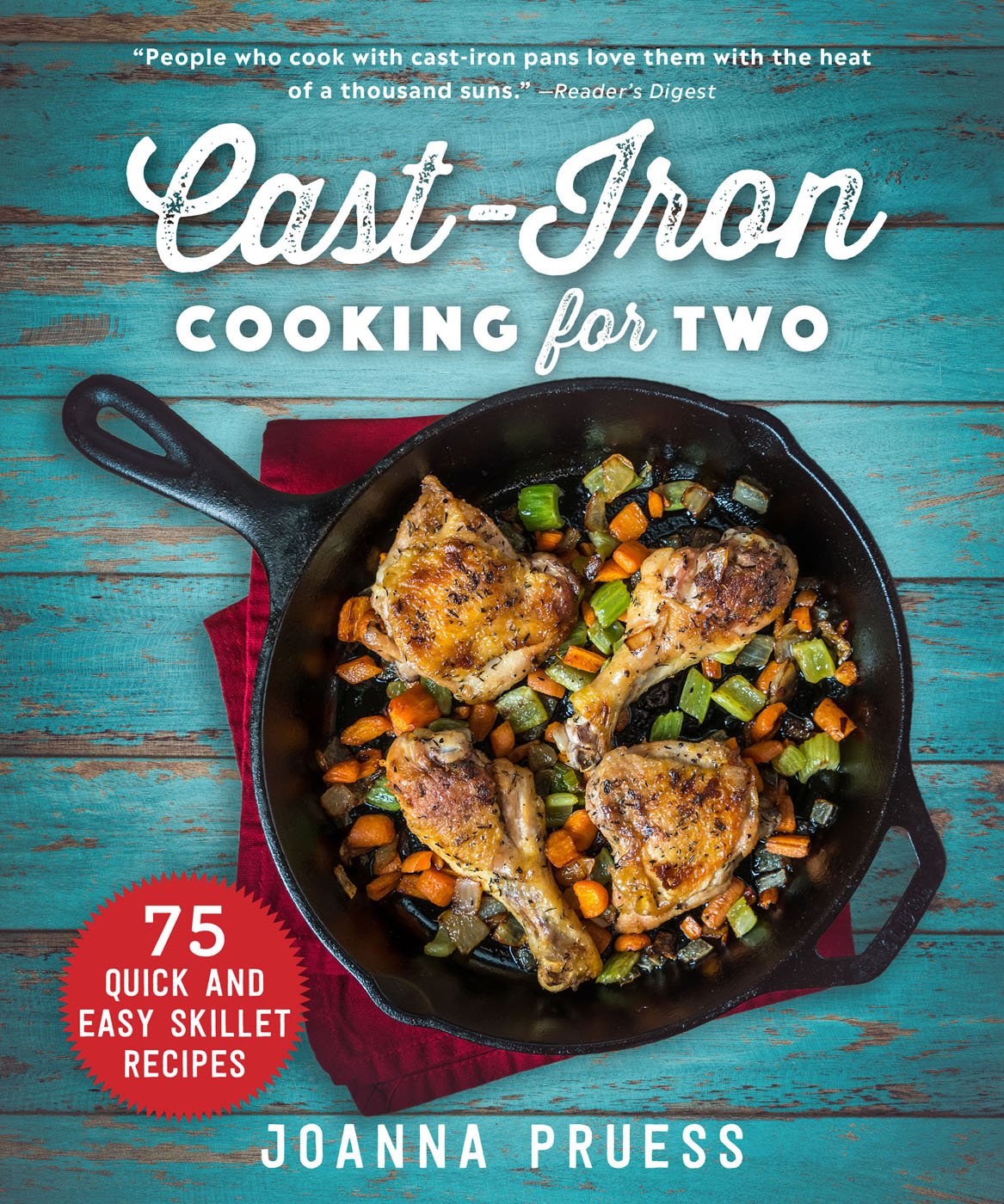 By the time I wrote Cast-Iron Cooking for Two, my three children had grown up and moved away. While I still cook and entertain, it’s now mostly for two or a few people. Although my larger pans are on shelves, my 6-, 8-, and 10-inch skillets are used often and are kept close at hand. Also, I acquired a 10-inch Lodge grill pan that I adore for making flatbreads, pizzas, and grilled cheese sandwiches.

I traveled quite a bit and have found plenty of inspiration in the flavors and dishes of countries such as Morocco, China, Turkey, and Mexico. During the course of my travels, when I have interviewed professional cooks and chefs, we often bonded over family cooking stories. For example, I loved ghriba, the Moroccan sesame shortbread cookies that Soumaya Cheb, a female chef in Fez, served me. Once at home, I found that my 6-inch cast-iron skillet made the perfect-size batch for my smaller household (so I didn’t devour them all at once!).

Finally, because of Covid and the quarantines in the last few years, people have been cooking at home a lot more, and people mostly want tasty, easy-to-make meals. Along the way, I tried out new dishes or variations of some I’d done earlier. I revised the tamale pie I learned in Southern California from my mom’s best friend. The updated version is made with ground turkey and includes the mole negro I discovered in Oaxaca, Mexico. A new Moroccan Lamb Shepherd’s Pie, topped with mashed yams, is seasoned with harissa and ras-el-hanout. Memories of time spent working in Tuscany inspired a delicious Hazelnut-Dried Fig Upside Down Cake baked in a 6-inch skillet with help from my friend Peter McGrath.

Along the way, I discovered that cast-iron cooking invites sharing. I’ve learned about tools, techniques, and – probably most importantly – learned from other cast-iron fans that there are several ‘right’ ways to clean and maintain cast-iron pans.

In the United States, cast-iron cookware is everywhere. The Lodge company was among the earliest manufacturers, and they are the longest-established company today. Chances are, you can pass your pans down to your children and grandchildren.

Joanna shares some of her favorite recipes cooked in cast iron

For vegetarians or anyone looking for a stylish side dish

“Oven-roasted cauliflower is easy in any pan. Using a grill pan makes endive so tempting and Turkish-style zucchini pancakes are a satisfying anytime side dish.”

We’ve teamed up with Lodge Cast Iron to give you the chance to win one of their classic skillets. For 125 years, the cast-iron skillet has been a staple in kitchens around the world. Lodge’s basic skillet has long been one of Serious Eats’ most recommended pieces of kitchenware and still leads their reviews of cast-iron cookware. It’s crafted in the United States and its naturally seasoned cooking surface is cast to last. The 10.25-inch size suits all kitchens and can be used to sear, sauté, bake, broil, braise, fry, or grill with ease. The winners will also receive a one-year subscription to ckbk.

Visit our Instagram page to find out how you can have a chance to win. (Please note: Competition only open to residents living in the United States.)