Behind the Cookbook: Oats in the North, Wheat From the South

“I wanted to bring food history into everyone’s home.”

She was born in Belgium but Regula Ysewijn’s childhood fascination with British culture led to her becoming a food historian and author of two of the most respected books on British baking: Pride and Pudding (2016) and Oats in the North, Wheat from the South: British Baking, Savoury and Sweet (2020). She’s also a trained chef, a graphic designer, does her own food photography – and is a judge on the Flemish version of Bake Off. Regula tells ckbk about the childhood nursery rhyme that sparked her interest in Britain, what motivates her writing, what she finds most intriguing about British baking culture. And we round up some of Regula’s best Christmas baking recipes, certain to bring on the festive spirit.

Q: You were born in Flanders, so how what sparked your interest in British food and baking?

A: My passion for Britain started very early, after hearing a nursery rhyme on the school playground when I was just a small child. It told the story of black and white swans in the Channel waters, a boat, the key to England broken, and the search for a blacksmith to mend the key. It was only about 10 years ago that I realised that it wasn’t about England at all, but about ‘Angel Land’ – which sound exactly the same in Flemish, my native language.

But that song did plant a seed, and all I could think about was this island protected by swans, with a wall around it and a gate closed by a giant padlock and a broken key. Now it sounds strangely like Britain closing itself off from the EU, but back then I saw an island so special that it had to be protected. Surely it must be magic. At home my mom would watch a lot of BBC programs, and a documentary about British heritage or a costume drama was never missed. We also travelled around Britain every holiday.

When we traveled around Britain we would always pass bakeries but my parents don’t have a sweet tooth so I was never allowed to go in and buy things. Nowadays food is often part of the travel experience – but that wasn’t the case for my family at least. We ate very well all around Britain, but we never searched for the local specialities or traveled somewhere especially for them as I would do today.

So I spent my childood pressing my nose against the windows of bakeries all around Britain, taking in what I saw, trying to determine if the bakes looked different in Scotland than they do in Cornwall. Every lunchtime I ate soup because I knew – back then, before the rise of the French pre-baked baguette – that my soup would be accompanied by the advertised ‘fresh warm roll’ or with a ‘fresh bap.’

There are so many words for a generic bread roll, and that intrigued me. So everywhere I went I got my bread roll with my soup – and in a way that was the first food research I ever did.

Q: Was it difficult to pitch and sell your ideas to a book publisher?

A: I’ve been lucky enough that publishers have always approached me because they saw my work in other places. I did once pitch a book to a publisher, and that was a book about Belgian beer café culture. It was published that same year. It’s important to spend the time working out the idea of the book. If you show the idea or proposal the publisher has to get it immediately. If they don’t get it, buyers won’t either, and a publisher would be apprehensive to touch it.

Q: How do you conduct your research? What are your sources, where do you find them, and how long did it take to write and produce Oats in the North, Wheat from the South?

A: I started researching both Pride and Pudding, my first book, and Oats in the North, Wheat from the South in 2013 and it took two years. Just after Pride and Pudding was published in 2016, the Brexit vote came in for leave and I just didn’t want to write the second book. I had writers’ block when it came to the subject. So I wrote and photographed Belgian Café Culture, a book in which I tried to capture the last remaining social institutions – our old beer bars – the unique interiors and the owners.

When it was time to start writing Oats in the North, in 2018, I relied on my previous research. After that came recipe-testing and photographing the food. I’m also a photographer, so I do that myself. The last bit was laying out the book.

In my previous career I was a graphic designer and my publishers have always thought it was a plus that I was able to photograph and lay out the book as well as write it. My husband is an art director so he creates the artwork and design. The books my husband and I create together really are a labour of love. There’s no team of food stylists, prop stylists, assistants and photographers; it’s just us two in our creative bubble, and my editor and publisher.

Q: Did you train as a baker or chef? What did you study at school and/or university?

A: I studied graphic design, art, and briefly dipped my toe into the fashion world studying fashion. I worked as a graphic designer for six years and began my own blog about British food and culture, Miss Foodwise. I got my first food-wring job in 2013 writing a food history column for Great British Food magazine and the online magazine Fish on Friday. I quit my day job and became a full-time writer and photographer in 2014.

I also have a chef degree. I started evening classes at culinary school in Belgium in 2011 and graduated six years later. At the same school I also got a degree as Belgian beer sommelier, which is what prompted my book Belgian Café Culture.

When it comes to history I didn’t have any training apart from art history in school. I read history books instead of comics or other things kids read. I went from a childhood and teen years reading books about British history, to reading papers from archaeologists. I then got one book on British food history and spent months trying to read all the books on the reference list. When it comes to research, I look at everything, not just books on food:  diaries, literature, household ledgers, newspapers…

Q: What were some of the most interesting/unexpected things you learned in the process of researching and writing Oats in the North? 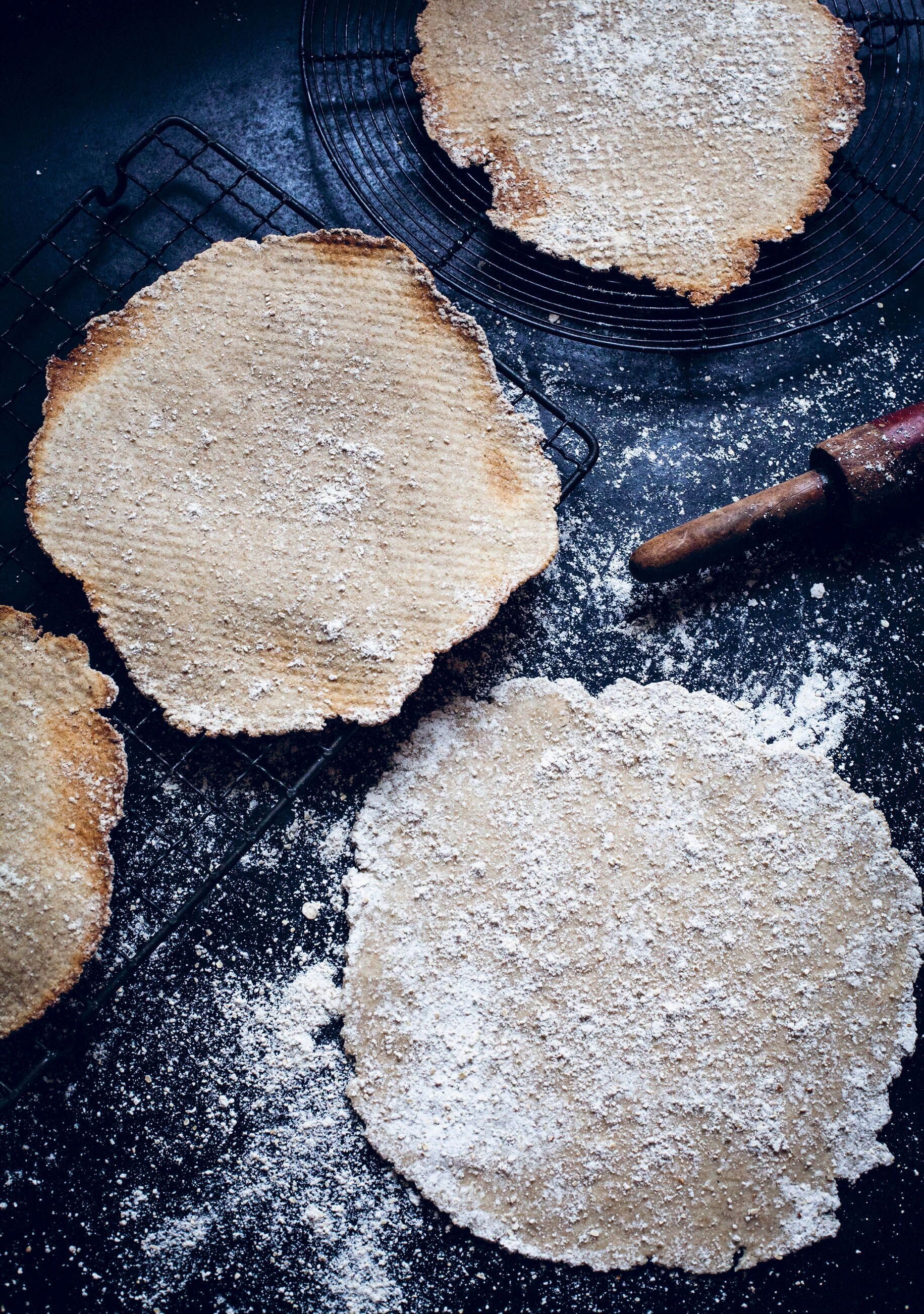 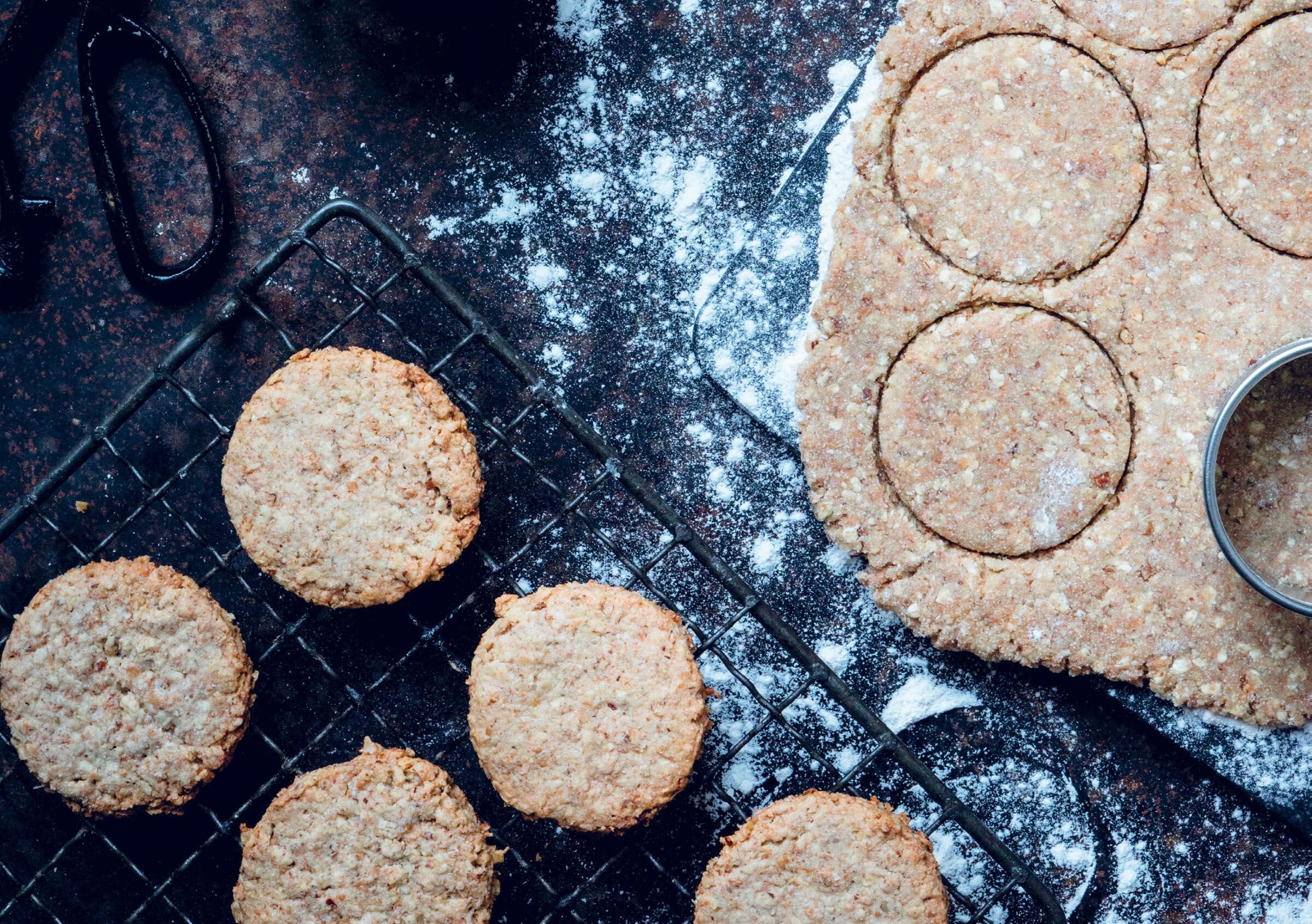 A: I found it interesting to see that in the north of Britain, the climate being colder and the summers shorter, there wasn’t historically a culture in bakes made with wheat flour because wheat didn’t grow there very well. Oat and barley were the most common crops, so many baked goods were made with these grains.

The most interesting of those was Clapcake, a very Scandi-looking thin crispbread made from oat flour. It was eaten like bread, baked in great quantities and dried out in front of the fire to extend the shelf life.

Ovens arrived much later in the Northern regions so they developed a culture of griddle cakes, which means they baked their dough on an iron plate over an open fire or on a stovetop. That dough needed to be flat enough to cook through – hence we see things like bannocks, griddle scones and oatcakes in all their guises.

Q: What is the quality about British baking that most appeals to you?

A: British people have long overlooked the regional nature of their own food culture. There is a lot to say about all these bakes but these stories have been locked away for far too long in academic books. I wanted to bring food history into everyone’s home, so that people can enjoy baking, and while they wait for their bun dough to rise or their Goosnargh cakes to bake, they can read a little something about what they have in their oven.

I love that British baking is a very homely baking style. It’s not like fiddly French patisserie, which is often more about the looks than the flavour by the time you are done with the cake. With British bakes you can’t hide behind pretty embellishments; what you see is what you get and it better taste as best it can be. British baking is very honest, very fundamental.

Q: If you had to choose three most notable (or your favorite) recipes from the book, which would you choose? 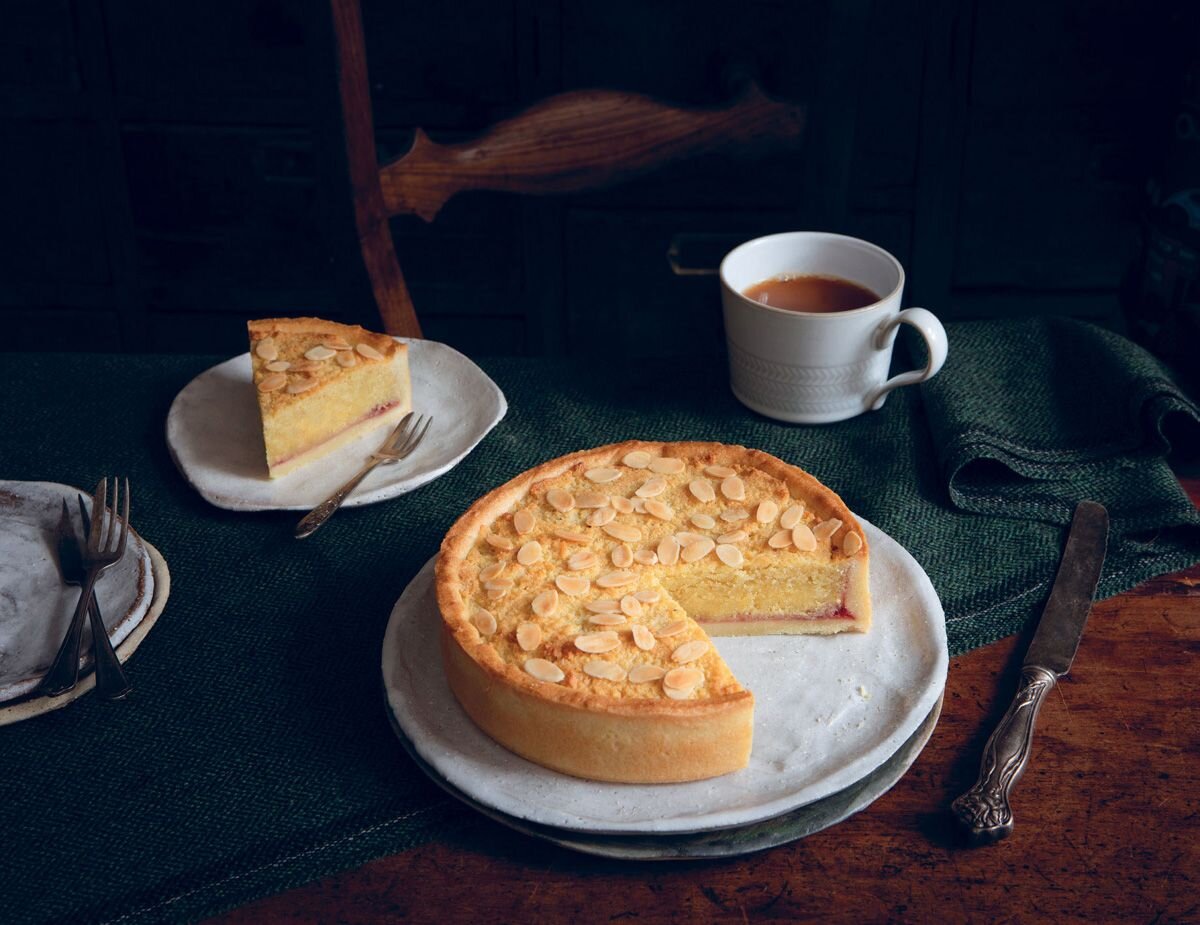 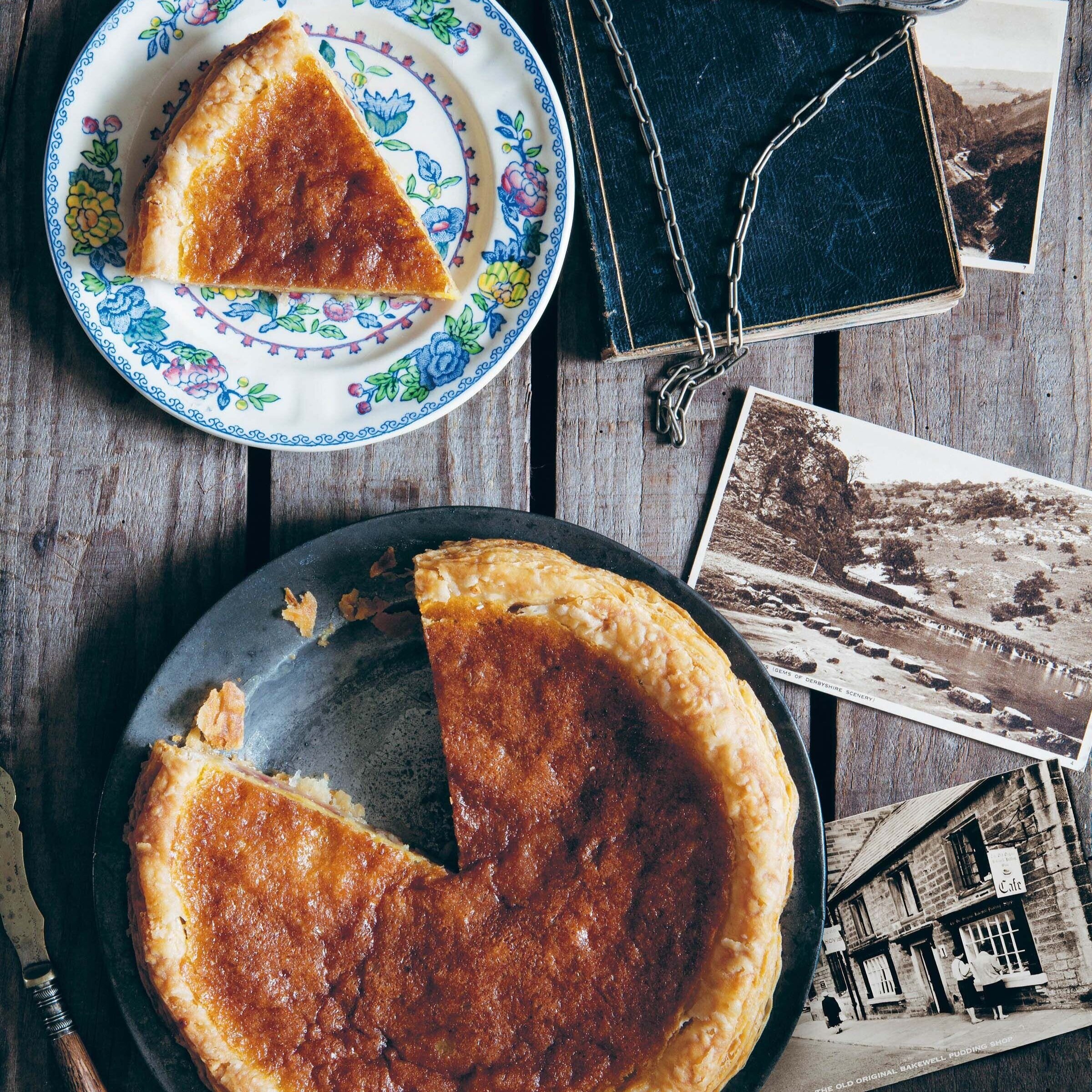 A: The Clapcake as I mentioned before, because it was a surprise to see Scandinavian-style crispbread in the north of England – although it made sense because of the similarities in climate. My other personal favourite is the Bakewell Tart, because I’ve done a lot of research into and the Bakewell Pudding, and was even asked to come onto BBC Two’s ‘Inside the Factory’ program to talk about their history.

I find it too hard to choose a last one as they all mean something to me, personally or historically.

Q: You are a judge ‘Bake Off Flanders.’ Did that come about because of your writing? What was the experience like?

A: I’ve been a judge for ‘Bake Off Flanders’ in Belgium for four years. They found me through my work just after Pride and Pudding came out in the UK. Because I didn’t write in my own language, and worked for clients in England no one had ever heard of me in Belgium – apart from some lovely pieces on my books in a few magazines. I had been on the BBC but never on Belgian TV. We don’t have doyennes like Mary Berry, Prue Leith or Nigella Lawson here, so the Bake Off team here felt really smug discovering me.

I have been a judge for the Guild Of Fine Food’s Great Taste Awards for eight years, and later for the World Cheese Awards, so I had experience of judging food. I find the most important thing if you want to feel confident as a judge is to taste as many things you can and learn about the flavors you taste.

For example a baker on this season’s program used smoky lapsang souchong tea in a biscuit that was supposed to mimic a savoury food. My co-judge thought it was awful and tasted ashy – but he doesn’t drink lapsang souchong so was taken aback by the flavor. New flavours can be wonderful discoveries, but sometimes you need time with them as they can be an acquired taste.

Get into the Christmas spirit: Regula’s top Christmas bakes

The Mincemeat below is the original medieval recipe, made with minced lamb and fruit!

And you can find every recipe from Regula’s Oats From the North, Wheat From the South and Pride and Pudding in full on ckbk.